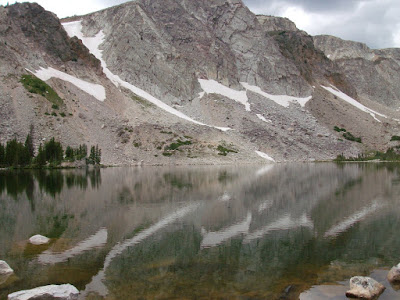 Second Evening in the Snowy Range

Reclining in my tent sipping some tea made with gooseberry current blossoms, newly sprouted pine needles (quite high in vitamin C), a few marsh marigold blossoms and a bit of turbinado steeped in water from a nearby alpine snow-fed stream, all heated on rocks at the edge of a pinewood fire.

Mixed a healthy batch of the o’er abundant marsh marigold buds and blossoms and tender young leaves into my evening meal. Couldn’t quite make out the taste of the marigolds for the other ingredients, so I might try a dish unalloyed with so many other ingredients that I might more accurately gauge this common high mountain plant’s culinary value. Perhaps mostly buds and only the freshest leaves (they are reportedly tougher with age), sautéed in first cold-pressed extra-virgin olive oil with a bit of cumin and a dash of cayenne. 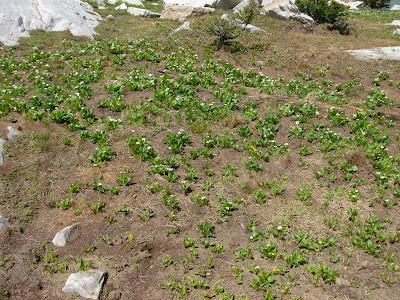 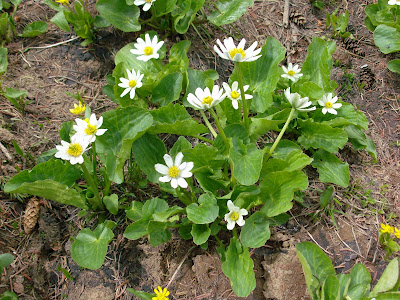 I may add some wild onions if I happen across some, despite my growing aversion to domestic onions, and might go on a hike to seek out some Boletus edulus, though it might be a bit early for this large wild mushroom indigenous to this region to fruit. These “King Boletes” are a very large fungus with a brown cap, spongy yellow porous spore-producing underside with a rather bulbous (though not proceeding from a bulb, like the generally poisonous Amanitas—an appellation which means “humility” in Sanskrit. Amanita muscaria is one of the less poisonous members of this family that is the well known red white-spotted mushroom from fairy-tales—think the Cheshire Cat’s perch) white stalk with darker vertical striations. These fungi can grow to over a foot in diameter, and there are reports of some growing to somewhere approaching two feet in breadth.

Else if I happen across one of a handful of other species of wild edible mushrooms I can reliably identify that rate in the “choice” category, I might add these to the Caltha leptosepala buds and leaves dish. Three or four Lactarius deliciosus (delicious milky-cap) would be as good or better than some Boletes. These bright orange mushrooms that bruise fluorescent green (not to be mistaken for the similar looking Jack O’ Lantern, another bright orange mushroom that actually glows-in-the-dark) are amongst the most highly touted wild mushroom that grows in the Rocky Mountains—though once they begin to rot, they emit an odor best compared to rotting fish. Even some properly identified puffballs would be cool, though I should note puffballs can resemble unopened Amanita bulbs, which bear such names as "death cap" and destroying angel. 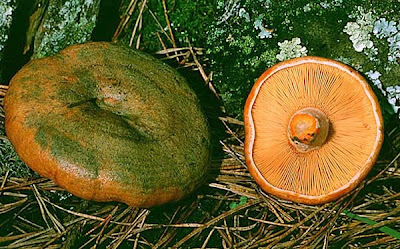 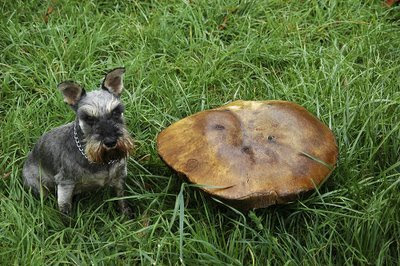 Third Evening in the Snowy Range

Made an extraordinary stirfry with a big batch of marsh marigold buds and dogtooth violet roots (rather a misnomer, as the flowers are quite yellow) a lovely mountain flower also known as troutlily, fawnlily, or adder's tongue (Erythronium grandiflorum). These corms (proper name for these roots/bulbs) are amazingly good, and taste rather like a mix between bean sprouts and water chestnuts. The marsh marigold buds taste a bit like tiny brussel sprouts, but without what some find the disagreeable taste associated with said sprouts. 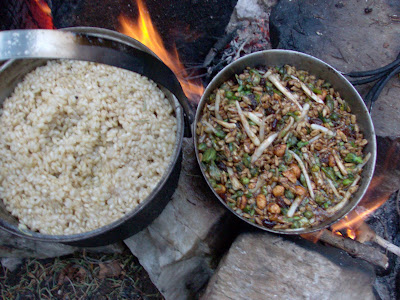 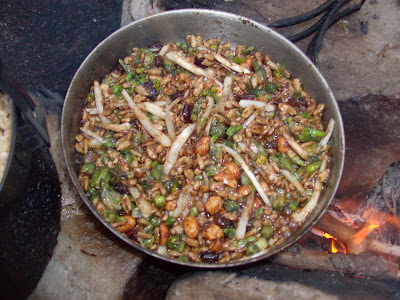 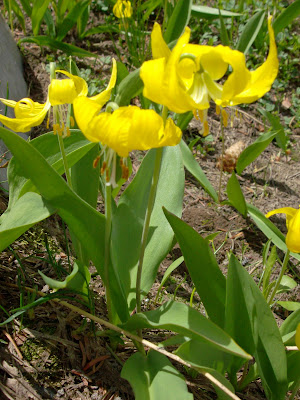 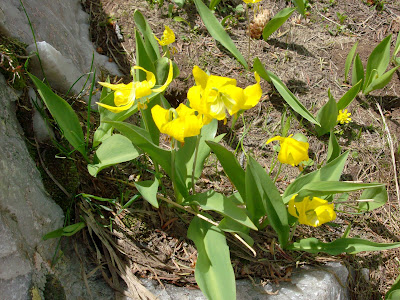 Conclusion: wild foods are fun and taste good too! Please try them out with appropriate knowledge and caution--some look-alikes may be poison!!
Posted by Jeffrey Charles Archer at 2:41 PM No comments: Links to this post

I have made it to the edge of the mountains. Not quite another state, unless with the meaning "state of mind or being." Though extracting myself from the relative comfort of a camper van (albeit broken down) with refrigerator and space heater (though the latter's obviously not necessary in the summer) was not so simple as years ago when I was rollin' down the road in the Miraculous Beast Shanti Mama (4WD '63 Dodge Power Wagon with slide in camper and sunshine face painted on the passenger door that I sold when the wars for oil began), I am starting to feel that liberation of spirit that is found in the wilderness, and especially amongst the high peaks.

The alpine fields of rainbow colored flowers I shall soon be enjoying are naturally irrigated by so many rivulets fed by the perennial snow fields above, remnants of the ten to twenty feet of white frozen water crystals from winters past, now dusted with a veneer of red-orange algae. There is one particular patch of wildflowers on the west side of a Lake called Marie that I'm hoping is in bloom. In an area not more than a few dozen square yards in area, an annual garden grows that maintains populations of at least a dozen species of the most beautiful of high mountain flowers. A small stream runs through the midst of this patch of blossoms, and a sizeable boulder beside the stream offers a comfortable perch from which to imbibe the wonderful floral essence of this magical spot. 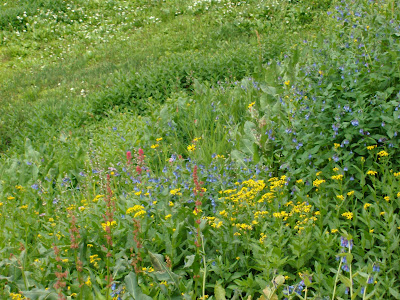 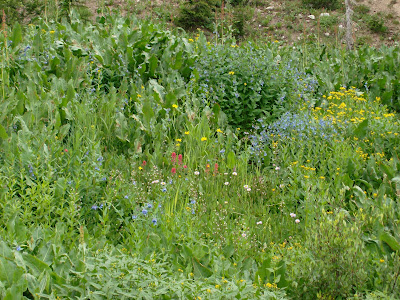 Numerous glacier carved lakes dot the landscape of the Snowies' alpine reaches, some maintaining icebergs floating in their midst until quite late in the summer. In my youth, I would scarcely even imagine heading up to the mountains without a fly rod or spinning reel to wet a line in these trout-filled lakes. These days it's more the wild edible plants and mushrooms that pique my interest, though I still relish the waters of these high places. You can even sip straight from the many waterfalls which flow just beneath the snow fields! Imagine, water you can drink without filtration and treatment, without added chlorine and flouride and whatever else various government agencies decide to add to the water that flows from the tap, and without the environmental destruction caused by the collection and distribution infrastructure required for even moderately scaled civic water works.

Pure libations!!
Posted by Jeffrey Charles Archer at 2:05 PM No comments: Links to this post 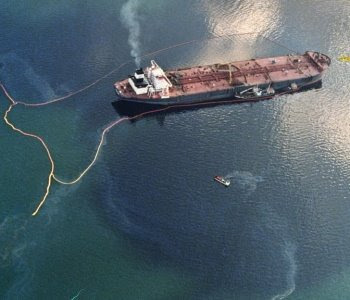 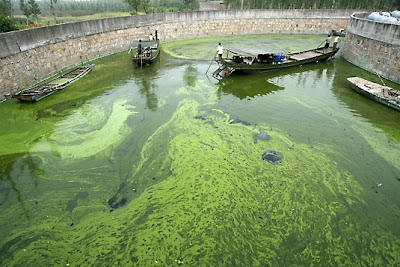 ExxonMobile--yes, the mega-petroleum monster corporation--has reportedly committed $600 million towards the development and production of large-scale biofuel plants from algae!! (see previous posts on algae based biodiesel) 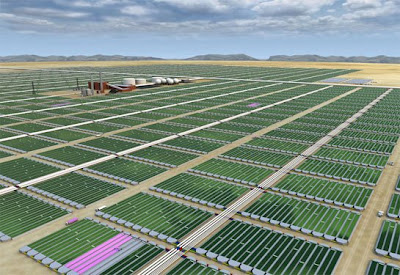 There might just be hope for the environment yet!!

Well, I've been in Laramie for over a year-an-a-half, and though I had the intention of finding reasonable employment, buying some land and carving out a dwelling, beginning to build the sailbus, preparing and sending a manuscript of narratives of my travels, and helping to save the old Fox/Empress Theater from demolition, seems only one of these has been accomplished. Only heard from about half of the publishers I sent my manuscript to, so at least one of the goals I had upon returning here has born at least potential fruit.

My laptop is out of commission and I think I am going to hit the road and trail (and maybe rivers) for a while, as I've been in quite a rut--fighting demons and other psychic/spiritual battles to only slight seeming avail--so posts on this blog are likely to be rather sporadic for a while.

Please do continue to check for new posts, and I'll do my best to write worthy reads when I've the chance . . .

[update: due to illness and family visits, I have not yet departed as of 7/15/09. Still intend to depart soon enough, supposing more obstacles don't get in the way, else some breakthrough in my current mire doesn't transpire . . .]
Posted by Jeffrey Charles Archer at 8:08 PM 1 comment: Links to this post