The True Identity of Jesus Revealed: Avatar of Ayyappa the Protector of Created Beings

As this is perhaps the most pertinent issue I have determined to address, I decided I ought pen (type) a more complete and pleasantly penned composition than the previous post(s) addressing this issue, detailing why I have become convinced of such a paradigm shattering theory.  So here I present to you truth seekers a rather more detailed telling of why I have come to believe that Jesus Christ, more properly known as Jeshua ben Joseph, was in fact an Avatar (embodiment of the Divine) of Deva (God) Ayyappa, also known as Shasta and Aiyanar.
It has been well enough noted and touted that there are many uncanny similarities between the Persons of Krishna and Christ.  A Quaker named Kersey Graves (1813-1883) compiled a list of some 346 elements in common between Krishna's story and Christ's story.  Indeed, none can reasonably deny that some of the analogies are quite convincing, not the least of which is the phonetic similarity of the names.  Nonetheless, something never quite seemed quite right with that attempt to tie those two purported God-men.  Though I believed that these connections were not without merit, I somehow had a sense they were NOT the same Dude.  Only fairly recently in my own spiritual pilgrimage did I come across accounts of the God named Ayyappa/Shasta, Son of Krishna/Vishnu (when He was manifest as a She) and Shiva, Son of God the Maintainer and God the Destroyer.  Almost immediately something in my intuition else rational faculties told me that Ayyappa was a very likely candidate for the more ancient and abiding identity of the person/Person called Jesus Christ.  Consider as you continue, especially if reading this from a Christian persective, that Jesus is touted to have said to his/His disciples, “I have sheep in other pastures . . .”
During my undergraduate years I was for a time a Southern Baptist preacher.  Though this might not seem a good starting place for a seeker of truth, it was in fact somewhat due to clues proffered by the mostly Southern Baptist professors at Oklahoma Baptist University that I began to question the dogmas of that faith.  Years later after I was introduced to the teachings of  sanAtana dharma I still felt that somehow Jesus was a legitimate expression of God and one who well enough presented and the teachings of eternity (quite literally, “sanAtana dharma”).  Ayyappa was the Person I was eventually drawn to that seemed to present a legitimate connection between my first religious impulses and the abiding truth of sanAtana dharma. 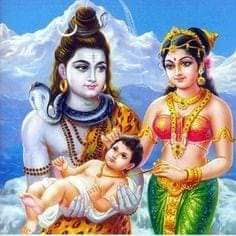 Ayyappa/Shasta is indeed a unique Son of God, as the Christian title, “the only begotten Son of God,” does tout.  Vishnu (God the Maintainer, known as Krishna in His most popular form), this one time, did come to earth as a Woman in order to deal with a particular menace, a dangerous demon named Bhasmasura.  After Vishnu had defeated Bhasmasura, Shiva asked Him to show Himself again as Mohini, His female form.  Well, as Shiva is the essence of masculine virility, He ends up desiring the lovely and seductive Mohini.  They end up hooking up and Shiva empregnates Mohini/Vishnu with Ayyappa, also known as Shasta.  This certainly seems to fulfill the “only 'begotten' Son” scenario proffered by the Christian religion, and in fact does fit rather well with the “Father, Son and Holy Spirit” trinity of Christianity.

I mean, if your Divine Mom is generally a Dude, what might you refer to Her/Him as?  Also of note in this guise, as Vishnu is the Paramatma, the aspect of God that dwells in everyone as Atman, God indwelling, then how would Jesus/Ayyappa refer to this Being if not as a “Holy Spirit?”  The first little clue, by the way, seems very likely to explain the rather confused masoginistic tendencies of Christians, even despite the New Testament statement that “there is neither Jew nor Greek, slave nor free, neither man nor woman, for you are all one in Christ Jesus.”

Thus, assuming my identification of said Persons as the same Being is legitimate, Jesus's real Mom (again, Mary was a surrogate mom) is generally a Dad, and is to whom Jesus was refering when He refered to “the Holy Spirit.”

Another Christian understanding of Jesus is that He was “the Word,” as their scripture says, “In the beginning was the Word, and the Word was with God, and the Word was God, and the Word became flesh and dwelt among us.”  Ayyappa is very much associated with AUM, the Primal sound (which is almost certainly the origin of the Judeo-Christian “Amen”) another quite obvious correlation between Ayyappa and Jesus.  Yet another obvious similarity is that one of the most prominent stories about Ayyappa is that as Manikantan He healed a deaf and blind boy, as Jesus would later be said to have done.

"Upon completing his princely training and studies when he offered 'gurudakshina' or fee to his guru, the master aware of his divine power asked him for a blessing of sight and speech for his blind and dumb son. Manikantan placed his hand on the boy and the miracle happened."  (http://srinagaroo.blogspot.com/2013/04/lord-ayyappa.html?m=1)

Raising the dead is another miracle attributed to Ayyappa, as His name Lakshmanapranadata, which means Reviver of Lakshmana's Life, clearly indicates.  Indeed these many indications incline me to believe that the two mythological figures are the same Person, as they have such attributes in common.

The similarities between Krishna and Christ might well be explained by the aforementioned theory, as well, as “the Son” was endeavoring to fill the roles of Krishna/Mohini (the Divine Mother of Ayyappa/Jesus) in His/Her absence.  Again, Shiva is “the Father” in this scenario.

One last thought along this line of reason is that during the “missing years of Jesus” was when He went away to the east to learn from His Guru before returning to Palestine to teach.  Many other connecting factors wait to be unravelled with this identification of Jesus as Ayyappa in mind, factors which give clue to the history and dance and pilgrimage of peoples and the play of the gods and of God and Goddess throughout history and eternity.  Buddhists tout Ayyappa/Shasta as an Avatar of Buddha.  And to reify that Jesus Christ was indeed and in truth an Avatar of Ayyappa, the appearance of a star never before seen is associated with Ayyappa !!

"Every year, millions converge upon Sabarimala irrespective of caste or creed, with garlands and irumudis, chant paeans to Lord Ayyappa, bathe in holy river Pampa, climb up the eighteen stairs, hoping to catch a glimpse of Lord Ayyappa, the Dharmasastha.
The Jewel Casket is carried on head from the ancestral residence of the royal family of Pandalam to the Shrine on the day. A Garuda, the Brahaman kite, follows this ornaments-carrying procession, hovering about in the sky, After these ornaments are worn on the Lord the bird circles the temple in the sky three times and disappears. Excited by this sight the devotees begin to chant "Swamiye Saranam Ayyappa". A Star never seen before in the sky appears on the day of Makarajyothi day before the sighting of the Jyoti. A Jyoti is seen for a little time on the hilltop showing the presence of Swami Ayyappan gracing his devotees."
(http://www.sabarimalaayyappan.com/lordayyappan.htm)

More from this researcher in later posts and in an upcoming book.  Please do feel free and encouraged to explore these esoteric strands, these potential clues, on your own, and if you come upon any connections of seeming significance please let me know by leaving a comment.

For a glimpse of His Divine Brothers' exploits, see:
Ganesha and Kartikeya's Big Race

Posted by Jeffrey Charles Archer at 8:09 PM 4 comments: Links to this post