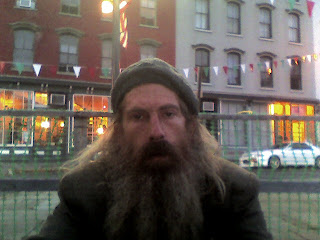 Posted by Jeffrey Charles Archer at 4:12 PM No comments: Links to this post

When Does All This Become a Good Ol' Fashioned Protest Against Unjust War, And for Better Living Conditions for the Poor

I missed the so called "Battle For Seattle," though have comrades were present.  Was at a May Day March in Portland, Oregon one year when we marched around town peacefully, no altercations with the cops, and gathered at a May Pole.  Marched against war with a large contingent in Santa Fe several years back, though was a peaceful procession so far as I observed and for my part.  Once watched a very mild altercation between forest cops and Rainbow Tribe hippies, shanti-sena styles.  Dunno that I would handle well being peaceful when seeing injustices enacted upon peaceful protestors, and also I have yet to discern the precise point of the protests--though I should note I find a resonance with much I hear quoted.  If there is proceeding a somewhat concise statement of what this protest is precisely protesting and meets with my wish to see this prolonged war to cease and green jobs and other help for the poor, justice brought regarding social inequities and corruption in government and big business, then I might have to catch the commuter train to Manhattan.  Then again, don't want to see and likely feel obliged to respond to police abuses of the people they s'pose to protect.  Good to recognize where one's presence is more beneficial to the cause.  700 arrests thus reported sure as hell indicates to me a breach of Constitutional rights, regardless of the protests purport.  Plan to hold a sign against the wars goin' on on tenth anniversary of Afghanistan invasion if in a town and not on the riverways hereabouts.  Blessings on those who still choose to stand up and make their voices heard, and blessings on democracy, liberty and justice.  Hoping fully this populist uprising brings home a good point and this moves across the country in such unlikely places as OKC.  Long live liberty and justice!!!

She is Nine and More, Beautiful and Terrible, Mama Destroyer, yo!!!!  She knows how to rock da' house, chill the vibe, She is Perfect Yogini, Divine Dancer, Slayer of demons, Beloved of Nilakantaka, Golden and also Black as night, Pure and Great Mother, Daughter of the Great Mountains and Mother of the Universe . . . 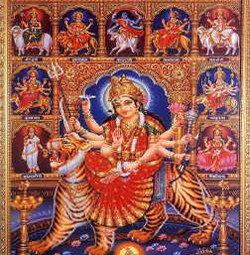 I am Hers to do with as She wills, laying myself before Her unabashedly devoted to Devi Durga.

Namaste
Posted by Jeffrey Charles Archer at 1:00 PM No comments: Links to this post