In perusing the parameters of the Gauri Yuga, the "Golden Age" in the midst of the Kali Yuga or "Dark/Black Age," among the primary attributes noted is that there will be many yogis and yoginis, devotees and practices of true devotion to the Divine, and that the most ancient of scriptures, Vedas, Puranas, etc. will be present.  All these factors are currently the case, as there are more people practicing yoga than at any point in recorded history, and the most ancient of scriptures are still extant.  In other words, we are in the Golden Age right now!!!

This text is taken from the Brahma-vaivarta Purana [14]

"For 10,000 years of Kali such devotees of Mine will be present on earth. After the departure of My devotees there will be only one varna."

"(Sri Krisna said:) Lord Hari will stay on this earth for the first ten-thousand years of Kali-yuga. Till then gods will be worshipped and the Puranas and scriptures will also be present."

The question proffered is, will we wake up and live gratefully and blessedly in this Golden Age, a figurative 10,000 years in the literal 432,000 Kali Yuga (5,000 years of which has already passed) ?!

And contingently, will we maintain those practices and that good devotion that characterize the Gauri Yuga to a very long "10,000 years"?

Also of utmost importance in our understanding of this age, the Kali Yuga with the Gauri Yuga in the midst, is an understanding of the reality of Kali Ma and Gauri Ma, Avatars of Great Goddess Mahadevi, Consort to Shiva.  In the most touted myth that tells of those two, Shakti came to Shiva reincarnated as a black woman. Sensing some insecurities in His reincarnated Beloved regarding Her appearance and also with other subtle intentions, Shiva calls Her "Kali Ma," or literally "Black Mama."  Thus Parvati determined to do tapasia (austerities) to be of paler complexion. When She completed Her austerities, She shed Her dark skin and emerged as Golden, though the skin She had shed stood to abide as Kali Ma, and was indeed the Great Goddess Mother of the Universe just the same as was Her who had emerged, Gauri Ma. 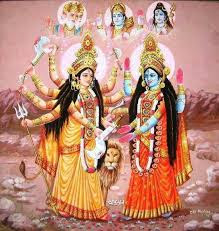 Thus this metaphor, Gauri emerging from Kali Ma, ought indeed be considered in relation to the Gauri Yuga in the midst of the Kali Yuga, i.e., that in truth their is no difference between.  Advaita.  To view the Gauri Yuga as "good" and the Kali Yuga in general as "bad" misses the lesson of the whole story, which is integrous and good and not divided into dualisms, as in truth reality is not.  To recognize the illusory nature of all of maya, the illusion of the differentiation between "Golden" and "Black," is the key to transcending and transforming life experienced in the Kali Yuga.  Gauri Ma is Good Mother, and Kali Ma is Good Mother.

If one wishes to truly understand history, one must recognize it is integrous to the least and to the greatest of degrees, to the smallest details of maya, this illusion we call reality, and that history is writ by dharma, with lessons to be proffered within the story and stories.

From the perspective of some Shaivites, devotees of Shiva:

Some Shaivites maintain that the ill effects of Kali Yuga can only be moderated by the manifestation of Lord Shiva Himself. Shastriji, one of the followers of Haidakhan Babaji, gave the following narration:
"Once Parvati asked Lord Shiva, her husband: 'You have done good work for the people in all ages, but I am afraid for the people in the Kali Yuga; how will they safeguard themselves?' Then Lord Shiva told Parvati: 'I will appear in the Kali Yuga and I will create a new state, a new centre of religion - a most important place, where I will live and establish all the Gods there.'"[19]

I would posit that the aforementioned work of Shiva has begun, and indeed Hari (Krishna) is likewise yet active in and on this world.  I might also posit that people might indeed be surprised where this Shambala (touted to be the future birthplace of Kalki, Avatar of Vishnu who comes riding a white horse to end the Kali Yuga in about 427,000 years) might happen to be. 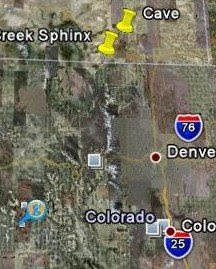 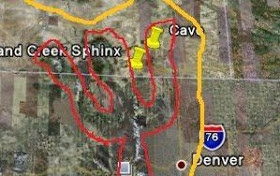 Kalki shall be born, in about 427,000 years, in a place called Shambala, translated as the abiding place of Lord Shiva.  In northern Colorado, in the mountains not far from a magnificent array of granite boulders in Wyoming known as Vedauwoo, is a Buddhist Temple and retreat known as The Shambala Center.  The Shambala Center is located in the mountains north of Denver near the Wyoming border, depicted on the map(s) above.  The Trishul (trident) is symbol of the Presence of Shiva, and the mountain ranges depicted in the satellite photos above do rather clearly show a Trishul formed by the Front Range (the staff) and the Laramie, Snowy and Sierra Madre Ranges in Wyoming (the blades).

I would thus posit from these clues that somewhere in this area, likely in the Laramie Valley or thereabouts, is where Shambala (the abiding place of Lord Shiva) is or shall be.

The exciting and edge of your seat movie, the thought provoking grand play, the lila that is the Kali Yuga is underway.  Don't get caught up in the spell of dualism that is a primary theme of this show, and stay well practiced (sadhana) to play well your role in this 432,000 years-long production, that it proves Bliss and not sorrow, integrous and united and not unduly divided, and that the Golden times might last the longer . . .