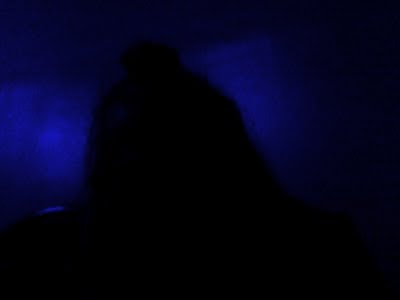 Hanging out at the Bourgeouise Pig in Hollywood. Dark blue walls and blue and red globes hang from the ceilings, mirrored disco ball embellishing and sending little dots of light spinning 'round, over the floor and across tables and chairs, bodies and faces. One room in the back, so dark a couple could get away with sex in the corner without much ado. Not terrifically seedy, mind you, just contingents and contingencies of hipsters (I keep waiting for that word to lose it currency, hoping I don't miss said moment and thus become out of fashion, or whatever . . .), an occasional person fitting some other category, maybe a few emos (still correct usage?), and me sitting here, hopeessly out of fashion as I wear only half-dreaded hair, currently in a knot atop my head, wearing a leather jacket that was hip (a womens jacket on which I reversed the buttons--pretty hipster . . . metrossexual, even) til the armpits started to rip, and thus poorly mended only to tear again. Alas, I'm still a hippie in a world again allowing this perennial mode to fall a bit out of fashion.

Subtle plays of consciousness and travel in time seem to rule these cycles (mind you, I am not claiming any expertise in the realm of fashion, nor even in current modes of subcultural nuances, just a not-so-old hippie observing what is I sees). Still hear some reggae in such venues, but the white kids fashion consciouness is perhaps too race conscious to allow that style to fall by the wayside--not that that's a bad thing, i.e., consideration for peoples long oppressed, I'm just sayin' . . .

Probably heading back to the beach, Venice or Santa Monica or something, before the end of the night, as squatting in Hollywood don't sound particulary appealing. Ain't never been to Skid Row, and haven't intentions too, as they might try to keep me and get me to move into my own cardboard box condo. I do believe I am starting to understand a bit of the phenomenon that is L.A., if but as an outsider, a mountainman in the big city--a status I do intend to maintain, all due respect.

Last time I visited L.A. previous to this was with a girlfriend I was traveling with in my '63 Dodge Power Wagon complete with camper on the back, rather appropriately named "The Miraculous Beast Shanti Mama." Meghan (said girlfriend) and I stopped in North Hollywood on a grand circle cycle round the western U.S. in order to visit my friends Pete and Melissa, a pair I knew from Laramie. The night before our scheduled departure, as Meghan and I lay in bed in the camper, we proceeded to proclaim our mutual distaste for big cities (something I have since repented and relented, despite my definite preference for wilderness and small towns). Next day as Pete and Melissa saw us to truck, a rather mysterious woman appeared and approached. I'd seen her walk past a time or two over the course of the previous few days, but hadn't payed much attention. Said person stopped and asked us what we thought of L.A., to which we both replied with the expected nicities. Said inquisitive passerbye was wearing a pair of eightiesish large lensed glasses and a somewhat librarianish dress, but did not carry herself like a librarian. Years later I happened to view the movie My X-Girlfriend the Superhero, and noted a rather startling resemblance between said passerbye and Uma Thurman, which seems to make a bit of sense, as Uma Himavati is consort to Siva, a figure I understand as, well, my archetypal self, so to speak. Whether was Uma Thurman for reals, or Uma Himavati playing as Uma Thurman, or some other magica being, I can't say, but whoever the woman was, she repeated nigh verbatim the words Meghan and I had exchanged the night previous, speaking less than favorably of L.A..  Meghan and I looked at each other, both aware of the irony or oddity of said repetition.

As Meghan and I pulled away and onto the highway, the engine started to sputter, flutter and fail, and we scarcely made it off the highway and luckily happened onto a mechanic nearbye. We ended up stuck in L.A. for somewhere around another week. Did pull a toddler who fell into a shallow pond just over his head in depth out of the drink in a park during that week, and learned to appreciate the people of L.A., who supported us by buying sage smudges and bead-work jewelry Meghan made, and keeping us in smoke whilst we waited for the mechanics to fix the Miraculous Beast Shanti Mama, so I s'pose multiple goods accomplished, eh?

Anyhow, namaste to the peeps of L.A. (and the rest of ya' too, no doubt). Not my idea of a long term haunt, ya know, but I gots my appreciation, for sure.
Posted by Jeffrey Charles Archer at 9:37 PM No comments:

Hummingbirds, hawks, seagulls and pelicans buzz and whir and soar above. Crows and ravens too, scan the scene for a meal, doing work unseen in the meantime in their caw-caw-caw, and watchful eyes observing, preserving as they peruse and dine on dead things, carion and refuse. Poe's angst perhaps well founded as these black birds betray traitors and tell of things unseen by other eyes, treacheries done in the shadows.

Hummingbirds humm as they visit my hippie-cum-hobo campsite, licking the sandstone escarpment above my bed for the salient substances therein, salts and other minerals, I suppose. Don't much mindtheir shit and piss falling on my head as they hover. Some cultures say tis a blessing to be sprinked with bird's tinkle and poop. Seagull's droppings are of course another story.

The hawks have appeared just recently, and remind me of my neighbors above when camped by Spring Creek in Laramie, a pair oft seen in amourous endeavors on electric line poles whilst I sat in meditation in or near my tent in a circle grove of trees down by the tracks.

Gulls by the thousands sometimes gather near here, where a creek meets the ocean. They seems smaller than ones I've seen in Laramie, dining on trash or floating on LaBonte Lake, often and not necesarily called 'Stink Lake.' Pelicans seem less abundant here than up north around Malibu, where they'd sometimes soar in formation with seagulls following in their wings' wake at Point Dume. And of course sparrows are here, ubiquitous and sweet little things (hawk sings as I wrote), as well as some smaler still have visited my seaside berth.

Used to dream more than lately of flying high, and certainly levitation's a siddhi I'd like to master. In the meantime and for dearth of monarch butterflies supposed to frequent here, I'm grateful for the birds, sightings and song, as I suffer harsh days here near the beach and by the harbor, Dana Point, California.

namaste
Posted by Jeffrey Charles Archer at 7:47 PM No comments: