Conflating Christ and Kalki: Too Anxious for the End

September 23, 2017 passed without incident, as yet again, another wave of Christian apocalyptic hype and absurdity peaked and rapidly crumbled.  Historically there have been many such cries of “The End Is Near” or “The End Is Here” proffered from the mouths and pens of the purported followers of Jeshua ben Joseph, aka Jesus Christ.  The years 1000 and 1666 were both years when many Christians feared else anxiously awaited the “End Times.”  In my late teen years into early 20s I was myself a bit caught up in that rather dysfunctional head-trip, I must admit.  I have since been exposed to a very much more ancient template for the measure of time and history, i.e., sanAtana dharma and the Vedic understanding of history, a religious construction that posits the age of the Earth to be 4.3 billion years, rather close to the estimations of modern science, which touts the Earth to be somewhere around 4.5 billion years old, and also does tell of the return of Lord Vishnu as Kalki at the end of the Kali Yuga, about 427,000 years from now. 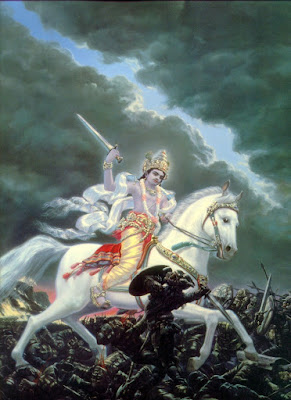 It is my contention that the Christian apocalyptic mythology is in fact merely a conflation with the Hindu myth which tells of the coming of Kalki, riding a white horse in a battle to end the age known as the Kali Yuga, the most unenlightened and shortest age of this kalpa of four yugas.  I make this contention largely as I am of the strong opinion that the Christian's incarnate God Jesus Christ is none other than the Son of Shiva and Mohini (Vishnu/Krishna as a Goddess) known as Ayyappa or Shasta.  Ayyappa is the Protector of Created Beings, and His exploits include healing a blind and deaf boy and raising the dead.  He was touted a sincere ascetic, and a “never before seen star” is associated with Ayyappa's apparition.  As His original Mother is Vishnu, Who is generally a Dude, it seems that when Jesus spoke of the “Holy Spirit” He was talking about Vishnu as paramatma, the Universal Divine Soul that is manifest in each and all as Atman.  Jesus referred to His original Father, Shiva, as “God the Father,” but it must have been troublesome for Him to relate to His Mother, who is normally a God who as Krishna makes love to 10,000 milkmaids just as each would be made love to, likely inspiration for Jesus to figure the church as “the Bride of Christ,” quite similarly to Krishna's relationship to His devotees, the Gopis.

Some traditions represent that Jesus went to Asia, spent some time with the Brahmins, and then with Buddhists, and I believe that during this time He began to figure out who He was, an Avatar of Ayyappa.  As such Jesus did in fact have brothers and sisters, but was special as the only Son born to Shiva and Vishnu, who are both normally Dudes.  As Hinduism touted that Krishna had left the Earth sometime around 3,000 BCE, it occurs to me that Jesus/Ayyappa may have felt as if the He was to follow the footsteps of Vishnu and thus to later fulfill the mission of Kalki, in Vishnu's absence and stead.  Jesus's followers were also anxious for such a glorious fulfillment of their religious longings, and being even less certain about the Divine truth than Jesus was—who the New Testament clearly represents as not always knowing even His own path in life, let alone the future of the whole world, and thus the Apostle John inscribed the Book of Revelation based on a conflation with the mythology of Kalki, as Jesus seems to have Himself confused His own path with that of His Mother Mohini/Vishnu.  The many parallels between Jesus Christ's life and that of Krishna make much sense in this regards:  Christ was not an Avatar of Krishna, but in fact was an Avatar of Krishna's Son when Krishna came to Earth as a Goddess.  This “identity crisis” might be considered as parallel to the psychology of someone whose parent has a sex change!!  Some of the intrinsic misogyny touted to be facets of Christianity can likely be attributed to this odd fact of Jesus's previous incarnations.

Indeed, the pieces fit quite well in such a construction.  When compared to the prophecy of the return of Vishnu as Kalki, the Christian apocalyptic vision clearly comes across as a knock-off.  I do not mean to belittle the figure or person of Jesus Christ/Ayyappa, as even Shiva, “God the Father” in this interpretation, does sometimes make mistakes in His doings, as once Shiva did confuse a demoness in disguise to be His Consort Parvati and begins to make love to said demoness, almost losing His linga (phallus) to the teeth hidden in the demoness's vagina!!  Avatars of the Divine do not always consciously know all the factors at play in their lives on Earth, according to nigh any telling from any given mythology.  Jesus didn't know of the pending crucifixion until right at the end, and likely had only vague understandings of the end of the age myths about His transsexual Mother's true Self (Vishnu as Kalki to be), and in His fervor Jesus/Ayyappa somehow assumed those “end times” myths about Kalki were about Him.

Fear not, the end is not yet for another 427,000 years!!  Live your dharma (duty, "keeping it together"), and enjoy the ride, as you likely have many lifetimes to live before the real "end times" !!


For further information on Jesus as an Avatar of Deva Shasta:
The True Identity of Jesus: Avatar of Ayyappa, Protector of Created Beings
Posted by Jeffrey Charles Archer at 5:21 PM No comments: Links to this post