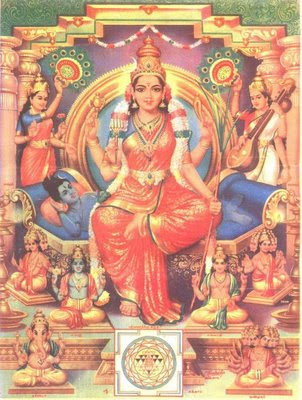 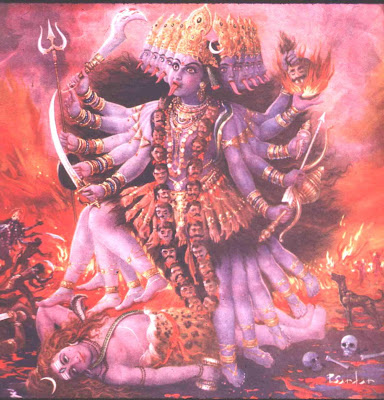 Blessings on this night of Devotion to Devi . . . 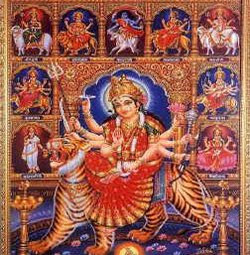 MahaDevi is wonderous, Durga, mighty even beyond the Great Gods. She is pure, compassionate, and rage beyond the heat of the sun, Great beyond the expanse of the Universe. When the Three of the Trimurti, Brahma the Creator, Vishnu the Maintainer and even Siva MahaDeva the Destroyer could not defeat the demon Mahishasura (who had obtained great powers by devotion to the Gods), the three Devas of the Trimurti united their powers to manifest DurgaDevi. The nine nights of Navaratri are designated to remember Her victory over this demon, and to do devotion to the Nine forms of Her who defeated a demon even the Great Destroyer could not defeat.

I noted in my post yesterday that Navaratri is divided into three sets of three nights to do devotion to the Three Devi (Goddesses) of the Trimurti. According to another (non-conflicting) tradition, this holiday is devoted to the devotion to the Nine forms of Sakti. An important thing to understand about the religions of sanatana dharma is that they are not meant to become dogmatic or strictly interpreted. These stories, though true, are meant to express the ongoing and dynamic relationships between humans and the Divine and other beings. These modes are an artistic rendering of the beauty and terror of life and death. Though the Vedas are to be understood as more scientific, utilizing metaphoric and symbolic language to discuss natural phenomena, devotional practices are not meant to be narrow or dogmatic, but empowering through the beauty of expression and sensation, sight, smell, taste, touch, and hearing (plus however many other senses there might be). 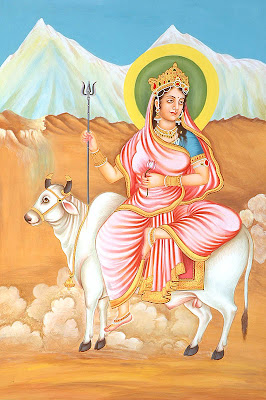 Daughter of the mountains, also known as Parvati, reborn manifestation of Sakti. 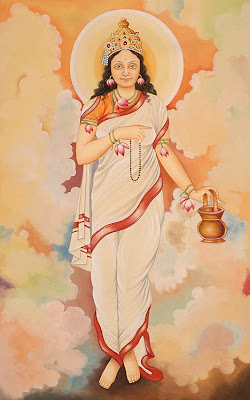 Goddess who constantly meditates on the Supreme Being, Brahman (not to be confused with Brahma, the Creator), and is exceedingly austere in Her tapas (extreme Yoga practices, "purifying fire"). 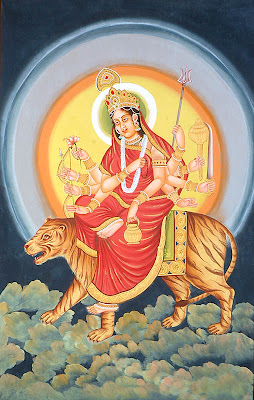 Goddess who wears the Crescent moon in Her hair, and is exceedingly wrathful if provoked. 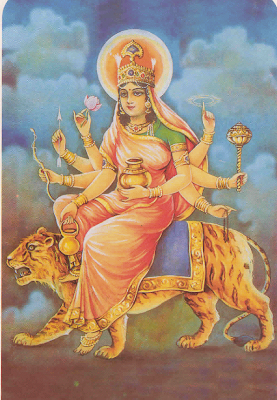 This form of Sakti smiled the Universe into existence. She is the energy of the egg of the Big Bang. 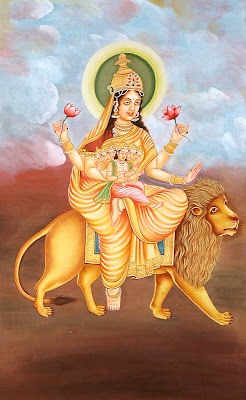 Mother of the God of War, Skanda. This form of Her is exceedingly maternal and compassionate. 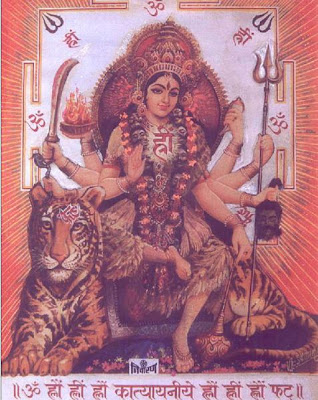 Daughter of the Katya clan, and a devoted daughter and kind Devi, She is also not somebody to mess with--She'll kick some ass if need be!! This form of Devi Durga is Kali, the most violent and dangerous form of Shakti. In Her dance with Siva, the Universe is destroyed--long time from now, by the way . . . 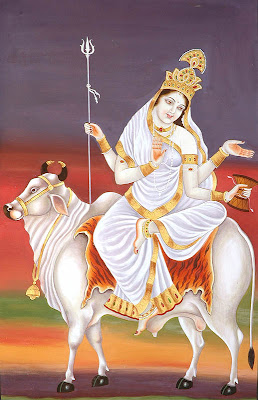 This form of Sakti did an extreme tapas by sitting still until she became covered in dirt. Siva washed her with the water of the Ganges, and She became bright and pure beyond measure. 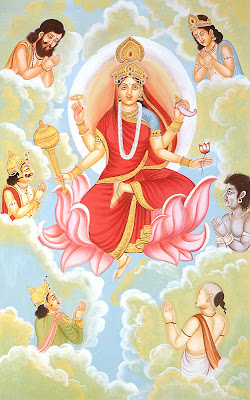 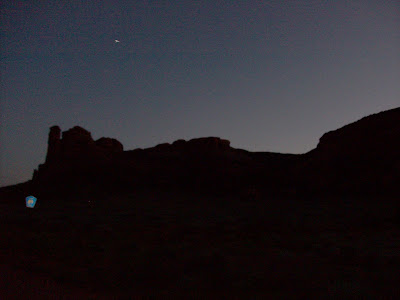 So upon perusing a series of photographs I took when visiting some land I want to purchase, I noticed that one of the photos had an anomalous smudge in the sky. Upon magnifying this section of the photo, I noticed a rather odd figure in the darkening deep blue.

Another photo of the same place I downloaded from the internet had previously drawn my interest, as a particular object hovering above the cliff did not match the nearbye clouds in appearance. Upon magnifying this photo, I considered the possibiiity that the person who took this picture had captured a UFO, if rather more out of focus than the anomaly in the photo I took later. 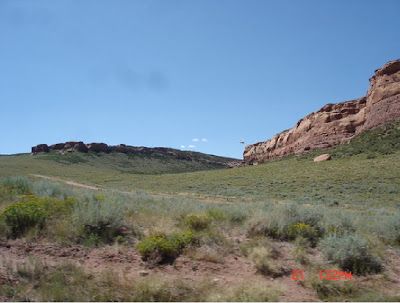 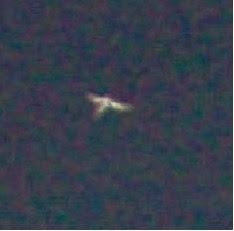 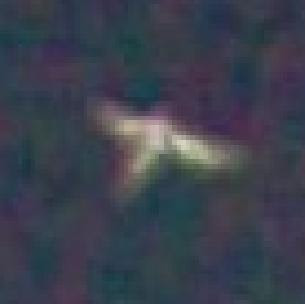 After discovering the winged figure in the photo, a number of streams of channeled information offered numerous interpretations of what or who this figure was. I must note, that although I am certain that the traditions of sanatana dharma (i.e., "Hinduism") offer a more valid and honest explication of history, human and divine, and in fact encompass the traditions of the Judeo, Christian, and Islamic strands of history (see post titled, "Hidden Origins of the West"), I do not deny that there are valid clues as to the greater story within the texts and traditions of those religions which mimic or are eminations/dispersions of Hindu traditions regarding the Trimurti of Brahma, Vishnu (best known as in America and Europe as Krishna or Buddha) and Siva and Consorts (blessed be the names of Her: Kali, Durga, Parvati . . .). Thus I would not deny that the figure pictured is a winged being known as an "angel" in the English language rendering--though I must note, whether a "good" being or no is by no means certain, as some bits of channeled info have indicated the latter option.

Indeed, depictions of like winged beings have appeared in ancient depictions from Syria and Mesopotamia throughout the so-called Middle East, and are extant in the lore of India, too. As I have continued to maintain, traditions around the world all contain clues to the subtle history of humans and gods and various other beings, and indeed a wild menagerie is evinced and an absurdly twisted tale is woven. 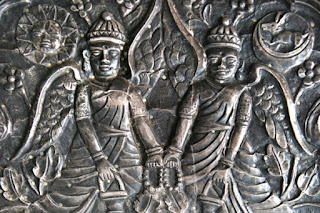 And it could be the figure in the sky is just a blurred star or planet--though the apparition as captured by my digital camera would still maintain significance, regardless of the explanation a rigidly materialistic "scientific apology" might offer. And the UFO might, likewise, be just a cloud.
Posted by Jeffrey Charles Archer at 1:34 AM No comments:

I've been thinking a good bit about sacred geographic features these days, perhaps to expand my vision to a span beyond the maddening flow of visions of persons I've known, that hover round my thoughts as I consider Devi and where She might be matched appropriate to me, whether passed by in the past, else gracing the earth with her footsteps nearer to where I sit these days.

To focus on the grand, yet tangible forms of mountains and lakes and oceans spans grants a reprieve from confusions of relationship, loves tumultuous tempest as wild as any gale or hurricane storming through my mind leaves me inclined to expand my thoughts to encompass a seemingly more expansive vista than the sound-byte-like progression of so many faces past my inner and external vision, though in truth, She and those other figures exist there, too . . . 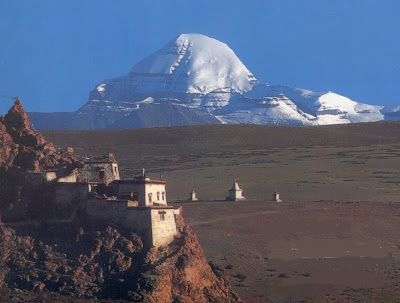 Kailash, shown above, is perhaps the best known locale where She and Her love are known to set up housekeeping. 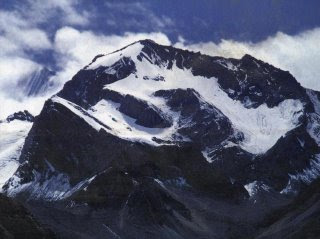 And this peak is expression of Her, Parvati, and Sacred AUM, too . . . 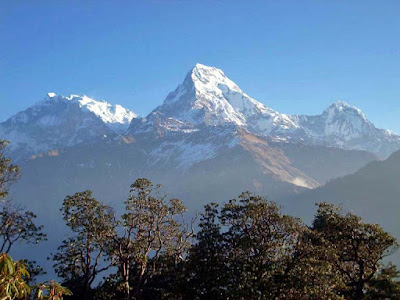 and this mountain is Her abundance overflowing, Annapurna which speaks in wind and waters flowing and rock solid truth of Durga's blessings of compassion and Mother-love to appropriately nourish those who sit beneath Her greatness, beauty and majesty . . . 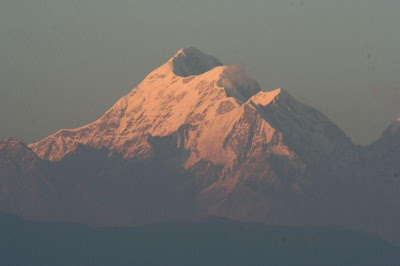 This set of three peaks is known as Trishul, and is presence of Him who's Her Lover, in some figurations.


And the above shows a lesser know manifestation of a Trishul, as three mountain ranges as blades, and another as danda, or "staff." 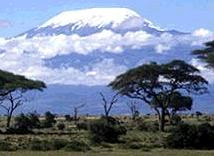 Mount Kilamanjaro, above and below, a nearbye peak called Meru--whether the one writ of in Vedic lore or no . . . 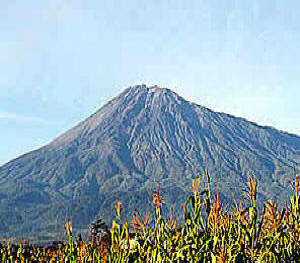 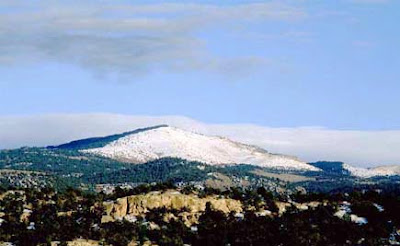 Above and below, two peaks sacred to the Navajo, though said people are more appropriately called Diné . . . 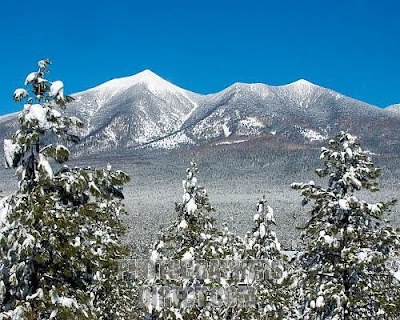 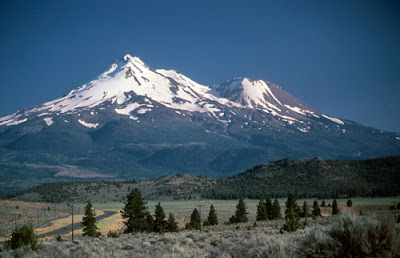 Again going north and west, two chosen of many possible magical mountains in the Pacific Coast region, Shasta and Denali 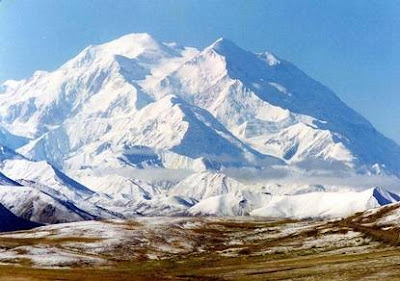 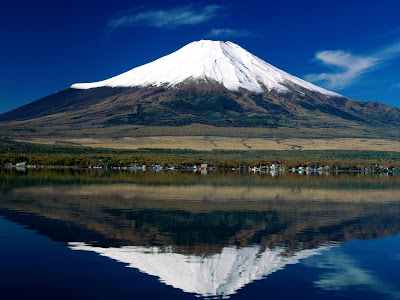 And almost round the world from the start of this picture show, Fuji in Japan, which is also the name of a particular varietal of apples.
Posted by Jeffrey Charles Archer at 2:00 PM No comments: