Subtle intimations of tragedy
and bizarre dramas
presented my mind’s eye,
from ancient secrets
of gods and goddesses
at play through the course of history,
to the same game
here and now
and in the dance I dance
with others day to day
and in the seeming mundane.

There is in truth
little difference between
the above
and the below,
betwixt myth
and life lived,
for those patterns and weaves
direct the steps and words,
thoughts and actions,
of both the great
and the small,
and it is in fact
not always clear
which is which,
of great and small,
in the play of it all.

Posted by Jeffrey Charles Archer at 8:00 AM No comments:

It was just the other day
I was clearing trails in the Cascades,
and just another
I was sailing the Hudson, exploring Montreal, London, Charleston, sitting sky clad in hot springs in New Mexico or California or Arizona,
just the other day.

Nor was it long ago
I held her in my arms,
just a moment ago
and not too far from there to here.

The calendar might tell it differently,
as might others who've grown gray since then;
and some might contend that distance insurmountable,
from then and there to here and now.

It is scarce a step, however,
nor even one split second in eternity,
truth be told:
All is here and now.

Dances of the Not-Two

A Cherokee and a Choctaw both,
Hooray and Hoorah,
whose banter and viewing
does raise mountains
In the tumult.

Black and White,
Darkness and Effulgence,
She and He
If any two really be,
Kali and Shiva.

These dichotomies, dualisms,
Self and Other,
always break,
do not abide,
and never really were.

Yet what a lovely dance
is this illusion,
what a wondrous play,
these supposed contentions
grant to life's script.

Posted by Jeffrey Charles Archer at 10:23 AM No comments:

Cycles of Dysfunction, Cycles of Bliss

Absurd cycles and recycled themes:
sometimes like a broken record we play those through--
too often not learning the lessons proffered,
so we do it all again.
This is why it is said
Siva is enemy to samsara,
as those cycles are too often
cycles of dysfunction
rather than those cycles of bliss
that lead to liberation.

Posted by Jeffrey Charles Archer at 3:00 AM No comments:

Once you understand that we are embodied expressions of the mind of God,
and in fact (however veiled in the milieu of maya) of God Her-/Him- Self,
it stands to reason some might chance purify their own flows so,
that they might become a worthy vessel,
Avatar,
of an abiding if not eternal face of the Divine,
of archetypal perfection.
This is yoga,
root of the English word "yolk."
Such path is all our potential,
all our destinies,
eventually and always already.

Posted by Jeffrey Charles Archer at 11:57 PM No comments:

The big question  of the most recent 5,000+ years of human history is simply "To be or not to be," basically as couched in the Sanskrit terms brahman and Abrahman.  That the later of the two supposed binaries (the dividing line between Hinduism and Buddhism, in fact) sounds rather like Abraham, patriarch of the Abrahamic religions, is no coincidence.  Rather, such is at least emblematic of the grand dialogue regarding said question as mulled about in the mind of God and via the lives of those peoples are playing out that query as a grand lila, a grand play that lasts thousands of years long.  Indeed we are the playthings of the gods, of God, yet that is merely us ourselves, the gods, God.

Posted by Jeffrey Charles Archer at 11:32 PM No comments:

Transsexuals in the Hindu Scriptures

238.           VISHNUPURANAM
Mitra and Varuna; but the ceremony being unsuccessful on aceount of some irregularity from the presiding priest: daughter Ila was born. But by the mercy of the two deities however, her sex was changed and she became a man under the name of Sudyumna. And he again became a woman under an imprecation (from Siva) near the hermitage of Buddha, the son of the moon.
One day while she was walking near the hermitage of Buddha, he became attached to her and beget on her a son named Pururavas. After his birth, the noble Rishis, desiring to restore Sudyumna to his sex, prayed to the glorious Vishnu who is the essence of the four Vedas, of mind, of every thing and of nothing and who is the sacrificed male. By his mercy us: once more became Sudyumna, in which character he had three sons, Utkala, Gaya and Vinata.
On account of his having been formerly born a female he did not receive any portion of his paternal kingdom. His father however at the request of Vasistha conferred upon him the city of Pratishta, and he gave it to Pururavas.
Of the other sons of Mann, Prishadhra, on account of the
sin consequent upon slaying a cow, was degraded to the conditions of a Sudra. 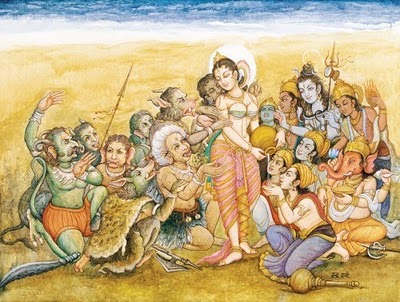 Shiva hooks up with and somehow impregnates Vishnu in His form as a Her, Mohini, and She gives birth to Ayyappa, the Protector of Created Beings, who I believe later reincarnated as Jeshua ben Joseph, aka Jesus Christ. 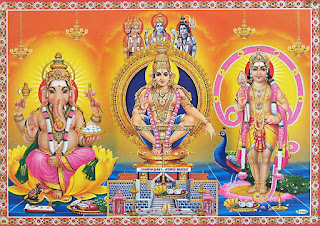 Ayyappa and His Brothers
Ganesha and Kartikeya 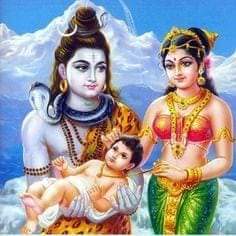 For more on that theory regarding the drama and dharma of the Divine, see this post:  http://karma-dharma-bhutadaya.blogspot.com/2017/05/the-true-identity-of-jesus-revealed.html
Posted by Jeffrey Charles Archer at 6:57 PM No comments: