To simply state the gist of my theory, the Hebrews were Hindus, or at least Abraham and his forefathers were before his tribe went west to Palestine (a theory many espouse outside of the official Western religio-historical establishment), and their god “Yahweh” bears much resemblance to and is likely derived from Deva Yama, the Hindu Lord of Death and Hell.  The Judeo-Christian “Devil,” in terms of the origins of said figure, similarly bears more than mythological resemblance to the God of Abraham's forefathers, Shiva (known as the Horned God to pre-Christian Europe), and possibly to Shiva's Consort, Devi Lalitha (Goddess Lalitha).

Below is the Indus Valley Seal showing Pasupati Shiva, and the Gundestrup Cauldron found in Denmark depicting the Horned God that European Christendom turned into "the Devil." 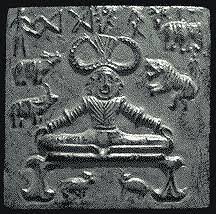 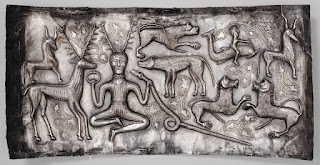 In other words, over the course of the development of the Abrahamic religions, Yama, the Hindu Lord of Death and Hell, was rendered as “God” (Hebrew Yahweh), and the figure who was formerly “God” (Sanskrit Brahman), i.e., to Abraham's forefathers, became figured as “the Devil” by the renderings of Judeo-Christian mythology.  Related to these conjectures, it seems the Hebrew rite of circumcision is similarly derived from a Hindu incest taboo rite.

I'll begin by noting something that bothered me from my days as a Southern Baptist minister and perhaps before.  Back in the day before I realized myself a yogi, whilst an undergraduate student at Oklahoma Baptist University and pastor at the First Baptist Church of Connerville, Oklahoma, or perhaps before (I resigned and later renounced all trappings of my ministry and moved to Chicago for grad school at the U of C after finishing my undergraduate degree), I made note of a rather confusing idiosyncrasy regarding the Judeo-Christian concepts of Heaven and Hell.

According to Jewish tradition, the destination of righteous Jews after they die is a place called “the Bosom of Abraham” or “Sheol” (New Testament, Luke 10:22).  Sheol is described as “down,” as in underground (Old Testament/Torah, Genesis 37:35).  The Hebrew word Sheol is generally translated to the Greek word “Hades” in the Septuagint (Greek translation of the Old Testament), and that Greek term generally translates to the English “Hell,” if you didn't know!!  This troubled me a bit, but I brushed it aside, assuming some theological explanation was surely expounded in some doctrinal statement somewhere.

One other clue I was granted in those days that something was amiss in the orthodox Judeo-Christian narrative was a statement made by a rather stodgy religion professor at OBU after a lecture about Abraham and his crew moving west from “Ur of the Chaldese” to Palestine (Ur has been determined to be in close proximity to else a part of Indus Valley Civilization, identified by most archaeologists as having existed in far southeastern Iraq).  At the end of this lecture, Dr. Dawson said with rather a scowl:
“Now there may be those who tell you that Abraham is somehow connected to the Hindu god Brahma . . . but we know better than that, now don't we!” he said in a passively-aggressively threatening manner, almost certainly a warning to those wishing for a career with the church, if a clue to those real seekers of truth (whether intended as such or no). 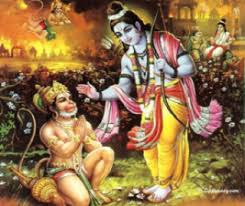 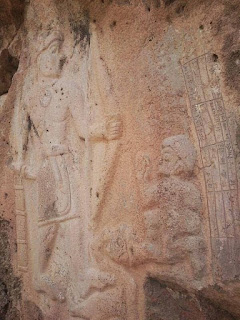 (A seeming Hindu temple discovered in Silemania, Iraq near Ur. Depicted above is a murti depicting Hanuman bowing to Lord Rama)

I later explored that strand of the historical narrative to conclude that indeed, papa Abraham was a “Hindu” (if not a term coined until three thousand years later) before he went apostate and left the homeland and faith of his fathers.  Voltaire (1694-1778) posited that Abraham and his crew were a tribe of traveling Brahmin priests (Godfrey Higgins, Anacalypsis, 1833, Vol. I, p. 405).  Abraham, Sarah and Hagar (Abraham's wife and her handmaiden, according to the Hebrew tradition) indubitably sound like Brahma, Saraswati (Brahma's Consort) and Ghaggar (the name of a tributary river to the Saraswati River), too much to be mere coincidence considering where Abraham and his tribe are touted by the Old Testament to have originated.  Some have further posited that the three Abrahamic religions, Judaism, Christianity and Islam, are respectively very much patterned after the Hindu Trimurti, Brahma, Vishnu (Krishna) and Shiva, the names of God as Creator, Maintainer and Destroyer according to Hinduism, and thus the three primary Personalities of God according to the religion of Abraham's forefathers.

Abraham received his name from his god “Yahweh” (a name purportedly revealed to Moses five to seven hundred years later, though extant throughout the Old Testament) when he and his tribe left the land of his ancestors (Genesis 17:5).  Abraham also sounds rather quite like Abrahman, a Sanskrit term meaning essentially “no-God.”  Abrahman is a primary tenet of most forms of Buddhism, thus Hindus often refer to Buddhists as “atheists.”  According to sanAtana dharma (roughly translated as “keepin' it together forever,” in recent times known as “Hinduism”), if one is not devoted to a legitimate guru or form or expression of the Divine (brahman) then Yama, the Lord of Death and Hell, is one's Guru and guide in your pathway back to God.

One of the Hindu myths that tells why the Creator, Brahma, is not much worshiped in India is that early in the process of creation, Brahma (Himself a created Being, created to create) created this hot mama all Weird Science style, then He began to lust after her.  According to some tellings, Brahma grew a fifth head to continue to lust after this beautiful maiden when she sought to evade His gaze.  Shiva then comes along and informs Brahma that as He had directly created this mama, she is thus Brahma's daughter, and not someone He ought lust after.  Shiva then severs Brahma's fifth head with His fingernail—thus, it must have been a small head which Shiva did cut off of Brahma, i.e., a circumcision (Asceticism and Eroticism in the Mythology of Siva, Wendy Doniger O'Flaherty,  London, New York:  Oxford University Press, 1973, pp. 123-127).

If Brahma, His Consort Saraswati and Ghaggar (a river tributary to the Saraswati) are indeed connected to Abraham, Sarah and Hagar of the Abrahamic traditions (Judaism, Christianity and Islam), as many have contended, then it is not a far stretch to assume that there is a connection in terms of the Hebrew rite of circumcision and the Hindu myth about Brahma losing His fifth head.  To follow this line of reasoning, in it's origin the Hebrew rite of circumcision was an incest taboo rite!  And indeed, it seems likely along those same strands of the mythological narrative and reasoning that Yahweh was in fact Yama, as would prescribed by the faith of Abraham's fathers for one who had left the religion of Brahman.

Essentially, Yahweh, worshiped by Jews and Christians as “God,” is actually the being Abraham's forefathers knew as the Lord of Hell!!  And then what did the Abrahamic project do next along those lines of reasoning but to render the figure who was God into “the Devil” in their myth-making.

It has been noted by scholars and indeed by popular culture that the figure of “the Devil” was largely a bastardization of the Horned God (see R. Lowe Thompson, The History of the Devil - The Horned God of the West - Magic and Worship, London:  K. Paul, Trench, Trubner, 1929), who was worshiped across Europe and parts of Asia as Cernunnos, and was and is known in India as Pasupati, the Protector of Animals and Souls, an ancient horned Avatar of Shiva found on the Indus Valley seal (5,000+ years old).  Deva is Sanskrit for “God” and Devi is Sanskrit for “Goddess,” and the term “devil” seems to have origins in Persia, quite near where many worshiped Deva and Devi, via the Avestan language (early Iranian used in Zoroastrian scripture) term daeva, which means “wrong gods,” or “gods who are not to be worshiped” (Wikipedia, “Daeva”).
According to sanAtana dharma/“Hinduism,” the Goddess Mother of the Universe is known as Devi Lalitha, and is Herself as much brahman (“God”) as are Shiva and Vishnu.  Lalitha is overtly bastardized as “Lilith” in the Hebrew and Christian traditions, which say she was a woman who was supposed to be Adam's wife but who would not submit to him as greater, and who was thus exiled to the desert to copulate with and give birth to thousands of demons each day (reference).

So to recap, I am essentially theorizing that:  the Jewish and Christian God Yahweh is actually a refiguring of Yama, the Lord of Hell according to the religion of Abraham's forefathers; the Judeo-Christian “Devil” is actually a bastardization or inversion of the God that much if of the ancient world (and indeed Abraham's tribe) worshiped before Abraham and his crew left the proximity of India and the religion of sanAtana dharma (“Hinduism”) circa 1900 BCE; and modern circumcision originated from an archaic incest taboo rite!!  Rather mind-boggling if not paradigm shattering concepts to wrap your mind around, no?!

A description of Lord Yama that sounds rather like the "Judgement Seat" of "God" the Christians talk about, no?:

He is the god of departed spirits and judge of the dead. A soul when it quits its mortal form repairs to his abode in the lower regions; there the recorder, Chitragupta, reads out his account from the great register called Agrasandhani, and a just sentence follows, when the soul either ascends to the abodes of the Pitris (Manes) [ancestors], or is sent to one of the twenty-one hells according to its guilt, or it is born again on earth in another form. (http://www.mythfolklore.net/india/encyclopedia/yama.htm)


Next diatribe of madman religio-historical theorization, whether published here or elsewhere:  Jesus was originally born as the Son of Shiva and Vishnu (that one time Vishnu/Krishna manifest as a sexy Goddess named Mohini) who is named Ayyappa, the Protector of Created Beings . . .