Maybe Columbus Found India After All: Traces of India Amongst American "Indians" 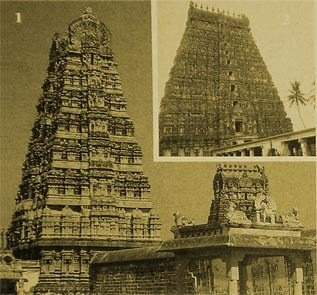 I promised some evidences of early colonization of America by ancient Indians/
"Hindus" (i.e., people of the Indian subcontinent, south Asia). By these evidences I intend to refute the theory generally held by academia and popular culture that Native Americans all came from north Asia across the Bearing Strait land bridge (as well as the Mormon myth that Native Americans were Hebrew--not to say no Hebrews or other Europeans, Asians, Africans or others ever ventured here before Columbus, just that most early colonists of the "Americas," or as this land was named by it's earlier colonists from India, "Patala," were either Hindu or north Asian).

One of the above ancient temples is in the Americas, and one is in India. Can you tell which is which?

Apache people worship Yusn, lord of wealth, one of Siva's names is Jatin, and Siva is known as Lord of Wealth.

Baboquivari mountains in southern Arizona, traditional name given by O'Odham people, and a source of much gold.
Baba-Kubera, Sanskrit, "father"-"god of riches and treasure."

Recall that the conquistador Coronado was seeking "Quivira," fabled city of gold. Obviously very much like the name of Hindu deity, "Kubera," again, a god of riches and treasure.

"Some tribes, such as the Huicholes in Central Mexico, even remember from what Indian seaport they left for America - Aramra in Gujarat. The Huicholes revere a part of the beach at the old Mexican seaport of San Blas, Nayarit, as Aramara, "Place of Origin of the Huicholes." Millenniums ago, Gujarat was called Jukhar. Juj-Kha is an O'Odham name for "Mexicans." The Navajos call them Nakaii (Nagas). The Apaches claim to be Inde (Indus People.) They worship Shiva as Yusn. In Sanskrit, Yishan = "Shiva." Apache = "Enemy" in O'Odham. In Sanskrit, Apachnan = "Destroyer." Another name of the Zunis ("Zoonyees") is Ashiwi (Azhuva?, "Way of the Serpent," in Sanskrit). Two of their principal deities are Shivani and Shiwanikoya. Zoonya (Zuni?) and Zeenya ware epithets of ancient Kashmir. According to Indian historian K. P. Chon, the Naga Azhuvas, perhaps the forefathers of the Zunis, were India's oldest ruling dynasty. He said that they ruled for more than a thousand years." (copied from Webpage, "Journey to Baboquivari, Gene Matlock explores the paths of ancient migrations," in the article, "The O'Odham, Native Americans with Ancestors from India?" link at end of post)

Deity's names are useful for finding still extant connections linguistically and culturally, as people generally are more careful to maintain the names of gods than other words. Also, words for the sun and moon often maintain their structure better than other common words.

Creek Supreme God was Master of Breath.
Breath, pranayam, is the source of life-energy and is central in Yoga.

Cheyenne for "sun," Éše'he.
Again, Sanskrit "asti," setting sun and the direction to India from the Cheyenne lands.

Aztecs.
Sanskrit, "Astika," faithful, one who believes in existence of God/another world.

And of course the Swastika (not the tilted version of the Nazi's, mind you) is found from ancient Indus Valley seals to ancient Native American sights.


Most of the above examples were found by a simple comparison of Native American words with words meaning the same in Sanskrit I found in a Sanskrit lexicon, and from similar research done by others. I imagine I could go on for pages and pages with this stuff if I chose, and mind you, these etymological similarities are as strong as any touted by any PhD linguist. Indeed, there is ample evidence that people from ancient India--and very sophisticated peoples, at that--were the forebearers and ancestors of many Native American Tribes. Yet again, the official version of history and archeology is found quite wanting, if not outright in denial of obvious truths of human history.